A Course In Political Miracles: Marianne Williamson May Be High on Tofu But She Still Makes More Sense Than the Politicians on the Hill 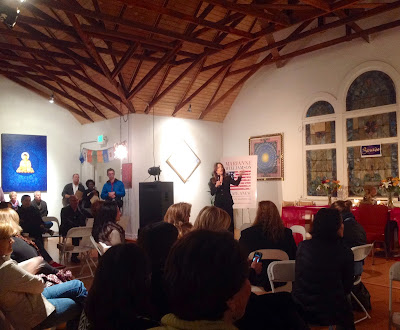 1.
Marianne Williamson is running for Congress in California's District 33.

If you have no idea who she is, it's probably because you need A Course in Political Miracles. Marianne wrote A Return to Love and is one of America's finest spiritual writers and teachers. One of her many homes is The New York Times bestseller list where she often stays for months. She is also Oprah's advisor in matters of the soul --- and surely you have heard of Oprah?

During a short trip to Southern California I went to a meeting for Marianne's many volunteers. (By the way, I'm allowed to call Marianne by her first name. Even her own website does: MarianneForCongress.com)

The volunteer meet-up took place in The Source, a beautiful spiritual center on Rose Avenue in Venice --- the kind of area where hippies wear Armani and order pizza with vegan crust. When I walked in, I was delighted to see mandalas, smiling Buddhas, and about 150 levitating volunteers who wanted to help Marianne get elected. I doubt Mitt Romney's headquarters looked like this. Romney never seemed like a man who would get Yogis excited about anything.

The Source is an old historical church with a saintly and serene atmosphere. (In America any structure built before 1980 is considered historical). Normally it's used for meditations, sacred chanting, and all those things that make Shirley Maclaine excited. The Source seemed like the perfect venue for a woman who is staring a movement that's based on the best four letter word of all, love. MONEY OUT, PEOPLE IN, as it said on a hand-out. Which downward dog wouldn't agree with that?

2.
Since I'm a Dane from Portland who isn't allowed to vote in the U.S. (except for American Idol) I didn't know where to sit in the crowded church. All around me people were holding up signs, Santa Monica, South Bay, Marina del Rey etc, so I decided I belonged to Venice since I got drunk on their boardwalk once. Luckily I was graciously accepted into Venice's circle of volunteers, all of them sweet and enthusiastic.

When Marianne Williamson appeared, she impressed me. She was honest, passionate and didn't sound like any other politician. Instead of repeating the usual "Washington is broken" mantra, she talked about how WE are broken inside and how that affects the society we are part of.

This quote could easily have been used on Human Rights Day, December 10 when 562 writers from 83 countries (including Nobel prize winners like Umberto Eco, J.M. Coetzee, Orhan Pamuk, and little me) signed a petition called Writers Against Mass Surveillance that was printed in newspapers around the world, including The Guardian, Frankfurter Allgemeine, El Pais, La Repubblica, and Politiken.

But Marianne Williamson went further at the meet-up in California. She promised to run an outer and an inner campaign, trying to raise consciousness everywhere, since we can't demand change from Washington if we don't change ourselves.

So from a spiritual  perspective we shouldn't just be angry with our government. We should see it as a frightened part of ourselves, obsessed with the fear of terrorism and love of control.
3.
Well, almost everything Williamson said that evening made sense to a spiritual airhead like me. She did NOT come across as if she had overdosed on soy milk. She was NOT a new age caricature but argued well. And thank God, she doesn't run for the Democrats but as an independent who wants love and dignity for everybody "instead of a sociopathic economic system that operates without a heart."

"I would be the happy if all my readers would donate as little as $5 to this campaign. In that case we would have more than enough money," Marianne said, finishing the evening with the kind of prayer you won't hear in Congress too often.

4.
But why should I go on about Williamson's Gandhi-like campaign? Go to her own website MarianneForCongress.com and see for yourself. Marianne Williamson is just one of many visionaries who knows that it's last call for humankind. Something has to be done about our fading democracy where money has such an obscene influence on what happens in Washington. Passing a decent law here and there isn't enough. We need a series of earthquakes to jolt us out of our self-absorbed empathy - you don't have to be Mamas & Papas to see that.

The question is actually simple: What is going to win in the end?  Love and trust, or fear and surveillance?  Most of the media and the establishment will definitely laugh at Marianne Williamson. But no matter what you think of a movement like hers, independent candidates are on the rise. How could they not be when Congress and Obama are fighting like toddlers?

But perhaps Marianne Williamson could lead the way in America. Now that would be A Course In Political Miracles indeed.