Is Christopher Hitchens a Messenger From God? 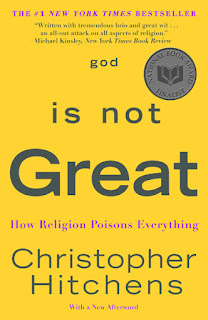 I just read God Is Not Great: How Religion Poisons Everything by Christopher Hitchens.

Since I'm a believer I didn't expect to like this onslaught on religion, but I actually loved the book. It's well written, funny, provocative, and humanistic to the bone. Christopher Hitchens shows that atheists often are more "religious" (moral) than believers - and more tolerant than the people who claim they've found the "Truth". Hey, at least atheist don't condemn others to Hell, they don't cut off your clitoris (at least, not for religious reasons), and they're happy to put their teeth into a good pork chop, right?

However, make no mistake about it, Hitchens is as dogmatic himself as the religions he criticizes. His absolute "Truth" is that religion poisons everything. He also seems to overlook that the world is full of people who carry their God within. They shouldn't be blamed for the mess the religions have made. It's not every Christian who uses the Bible as a baseball bat. And it's not all Muslims, Jews, Buddhists or Hindus who want to show others the "right" way. A lot of believers just live their values - their faith gives them inner strength and make them better people. So the problem is not God at all, it's organized religion.

However, Christopher Hitchen's book is an extremely important work. And it's definitely much more honest than Bill Maher's mockumentary Religulous that used all believers as a punching bag for his wit.

But the world does need to be reminded how much damage religions still do today - how most wars are caused by people who think their "Truth" is superior. So no, God Is Not Great ain't a work of the Devil. It's more likely a work of God.

Yes, I see it now: While Christopher Hitchens was sitting in his study, God descended on him, angels whispered in his ears, saints led his pen. Who knows, maybe God even supplied Hitchens with his Scotch to calm him down (and with cigarettes to soothe his nerves) because they knew that the world of faith needed a provocative slap in the face.

So without realizing it, Christopher Hitchens, the rationalist, has written a spiritual manifest. It's not only a Bible for people of the Atheist faith, it's also a work for the millions of believers who are suspicious of organized religion.

Most often God and religion have very little to do with each other. It's this point that the angry, but brilliant Christopher Hitchens doesn't seem to get.