A Portuguese Book Launch And A Reindeer Melting In The Sun 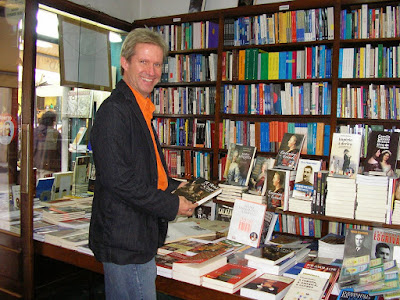 
1.
Santa Claus looks out of place.

After all, he's strolling down a walking street in Lisbon in 75 degrees desperately looking for kids to fondle. But who needs Santa and Portuguese reindeers when the sun is shining and it's unseasonably warm?

I love Lisbon. I just walked into one of the biggest bookstores in the city. The first thing I saw was my novel A Anã do Czar (The Tsar's Dwarf) lying next to José Saramoga, the Nobel prize winner, and a new biography on Marie Antoinette. Now that's the kind of company I like to keep!

Like a total idiot I said to a lady browsing through my book: "I wrote that," pointing at my picture like a self absorbed madman. She looked at me with the kind of look you reserve for Danish novelists: "Did you really?"

I walked away feeling like a total moron, but one minute later she came back with three other people who worked in the store. At first I thought they were going to kick me out, but they asked me to sign four more books and as the gentleman I am, I gave in to their unreasonable demand.

When I left the bookstore, I thought: Maybe these book people haven't met an author before?

2.
Saturday night was the official book launch at FNAC in Colombo, the biggest mall in Portugal. It's lying next to Benfica soccer stadium. I must admit I'd hoped that Rui Costa would drop by, or a few TV-stations, but we had to live with about fifty people which definitely was fine.

My publisher Cláudia Peixoto (a woman with exquisite taste in literature) welcomed everybody. Then one of Portugal's best writers Sérgio Luis de Carvalho compared my novel to David Lynch's Elephant Man (my book has the same theme, something I've never thought of).

Sérgio gave a glowing review of my novel; he's a wonderful man. I should know because I stayed with his family for two days overlooking the hills of Sintra and the neighbor's laundry: T-shirts, underwear, over sized bras that unfurled like flags. I took over his son's room, I stole his strawberry yogurt and made bad jokes about Benfica, but his dog Boris was crazy about me.

After Sergio's talk, it was my turn. Since my Portuguese is kind of appalling (I know three words), I spoke in English (which, come to think of it, is quite appalling as well). Afterwards, a well known poet and radio host, José Fanha, read aloud from my book. Even though I didn't understand much, I was very impressed with the reading.

Later I signed about 18 books and talked to a few people who had liked my first novel O Paraiso de Hitler (The Whipped Cream War) that came out in Portuguese last year. Just the thought that I actually have fans in Portugal fills me with a great sense of joy. 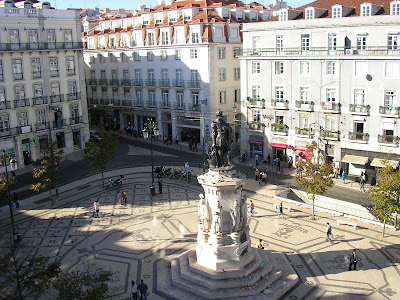 3.
Lisbon is a wet dream for anyone who enjoys a city full of hills, history, and hallucinations. There's something wonderfully old fashioned about this capital. People are courteous, the women are pretty, the port wine is cheap. And the city is full of street cars with huge Coca Cola ads.


I spend a lot of time in Alfama, a gorgeous part of the city. All houses are white as bedsheets. It has a feel of an Arab city. People greet you; you even run into the odd goat. The locals don't seem as melancholic here as they do in the rest of Lisbon. The Portuguese are not your stereotypical Latins. They're not drama queens like the Italians or loud like the Spaniards - they suffer. Oh God, they suffer. Just listen to the music that comes out of them. Fado is like a love poem to a corpse. So if you're into blues, feel free to visit one of the fado restaurants in Barrio Alto. They're a total rip off. When I went, we ended up dancing on the tables as if we were in a bierstube in Gelsenkirchen.

4.
On my last day in dreamy Lisbon, I run into Santa Claus again. This time he has brought a snowman. The moment I pass him, fake snow falls from a balcony. For a short second it looks as if Santa is drowning in dandruff. Then he sees a cute kid and starts to chase him down the street ...