God, I'm So in Love with Judge Judy. She's my Favorite Nazi. 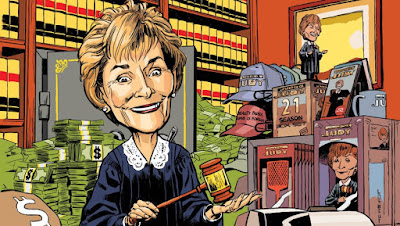 Please don't tell my girlfriend. She'll be devastated when she finds out, but I can't keep it to myself any longer: I'm madly in love with Judge Judy, and I want to be the stepfather of her kids.

For those of you who aren't blessed with American TV, Judge Judy is a real judge who has a reality show on CBS where she settles cases in a small claims court. And she does so with gusto, wit, and the kind of sadism that works like a charm on TV.

By the way, Judge Judy is not a babe. She's more like your Latin teacher from Hell. But make no mistake, Judy Sheindlin is God's gift to American reality shows. She is tough, funny, and fair. She'll abuse you whether you're innocent, retarded or left handed. Her intuition is uncanny - Judge Judy knows you're a loser, even before your step into her court. And she's happy to humiliate you in front of ten million viewers.

What I admire most is how Judge Judy rules the court with an iron fist. She's happy to tell people that they're bums, free loaders, and sociopaths with dandruff. And she has every right to because her ratings are high!

A clairvoyant friend told me that during Judy's last incarnation she worked in a concentration camp for the SS - and now she has come back to finish the job. But of course that's not true. Judy is a wonderful mother, a stout Republican, and a gracious tipper. Her values are all-American. I bet she believes in God as long as He shuts up when she speaks.

Well, I for one believe in Judge Judy. She's a part of me ... not a part that I like, but a part nevertheless.

But now, you have to excuse me, I have to jet. In a few minutes another re-run of Judge Judy is coming on - the one where two choir boys are suing a priest for spanking them with his Bible belt. I bet Judge Judy is going to have a field day with that one!