Syria Is A Dream, But Journalists and Lesbians Are Not Allowed (Memories of Pre-War Damascus) 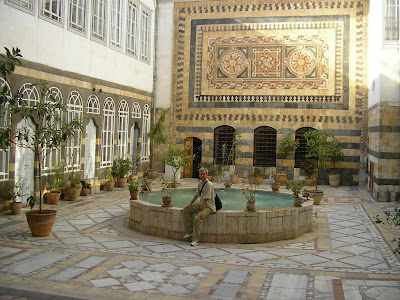 1.
There is a snake in the courtyard. And I'm not talking about Bashar al-Assad, the Syrian dictator, even though God knows I should.

No, this is a tiny but poisonous snake. You wouldn't expect to find one in the middle of Damascus, but here it is at the Danish institute, waiting to bite a degenerate Dane and all the other authors, scholars, and painters who are working and studying at this gorgeous place.

One of the Syrian guards catches the snake and puts it in a glass. "It's very dangerous," he says with a big smile and starts to play with the reptile. I almost feel sorry for it. A snake doesn't look right in a tea glass. On a desk. In the Danish Institute in the middle of the Syrian capital.

"And now," the guard adds, "we're waiting for the snake mother."

Some of the other guests go pale.

"What ... what do you mean?" an older scholar asks nervously. He's only used to deal with Rumi, so this is a little bit too real.

"The snake mother will come to seek revenge, of course" the Syrian beams.

That night none of us sleep well at the institute. We are all waiting for an angry mother snake, attacking us through our bed sheets, ready for the kill. 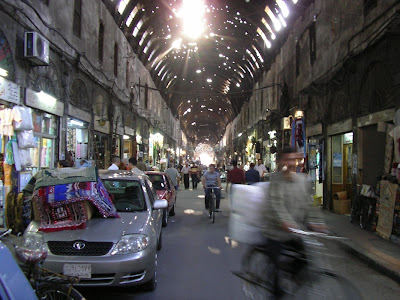 2.
I'm reminded of this innocent scene from my 2007 visit to Syria.  Those were the days when Bashar-al-Assad and his state psychos had everything under control.  Luckily, they don't anymore. Syria is coming undone, and I hope things will end well because the Syrians are some of the most generous and warm people I've ever met.

The Danish Institute  is situated in an old Arab villa in the suq in Damascus. When you walk out of the door, you're in the middle of 1001 Nights. It's a magical place with a small fountain, gorgeous walls, and a high iwan.

The villa is a national treasure. Most of the construction is from the 17th century, but one wall is actually from before Christ. It used to be part of a Roman structure. So here I am, surrounded by sultans, baby snakes, and the smell of apostles and curry.

I've always been crazy about the Middle East. Maybe it's because my grand father was born in Safed eighty miles away, in what today is Northern Israel. He was born Jewish but his father was a Coptic Christian with an Arab background, so I'm happy to say I carry that confusion inside of me. 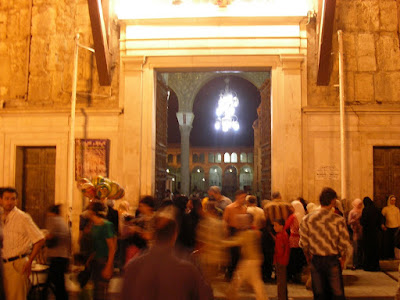 3.
One of the many fantastic places in old Damascus is the Umayyad mosque, which is among the most important in the Muslim world. It's a ten minute walk through the suq with its donkeys, silk vendors, and water bearers.

The mosque is not just a place for prayers and agitation as we like to think in the West; it's also a place where kids play grab ass and where you meet a lot of Syrians. One day I run into Zeid - a student of English literature at the University of Damascus.

"So what writers do you study?" I ask.

"Thank you so much. I'll bring this important information to my professor," he says solemnly.

Zeid is a nice guy. His English is decent, so I take him to a restaurant with my favorite lesbians from the institute, the Danish author and critic, Leonora Christine Skov and an illustrator friend. It's Ramadan. Everybody is chewing on their head scarfs, but most Syrians succeed in being pleasant until around 5 pm. Then they just can't take it anymore.

When we return to the institute, we're told they have found three more snakes. A  few hours later, a Syrian terminator shows up. He looks like a reptile himself, sticking his tongue out, putting out poison in every conceivable hole, including some of my mine. After half an hour, the whole place stinks like a chemical plant.

"We've never had snakes here before," the secretary complains. "Only a few adorable scorpions in my office."

However, the Institute is always infested - it's full of hidden microphones, and several of the people who work there are definitely informants. We are probably followed when we venture out into Damascus. Syria is one of the most efficient police states in the Arab world, and at one point, a local shop owner tells me that he is forced to have a picture of Assad on the wall.

"I would have preferred Cameron Diaz," he says.

4.
The snakes finally disappear from the institute. Or so it seems. You never know with the Devil.

I want to publish a piece on my blog, but blogspot.com is forbidden in Syria. It's hardly surprising because the first time I was in Damascus Hotmail.com was forbidden. My second time here it was Yahoo's turn to cause the wrath of the regime.

Leonora and her friend have the same kind of problem. When they try to get into the official Danish website for homosexuals, they are met by the stern picture of Bashar-Al-Assad, may peace not be upon him.

In a certain sense, it's all very logical. Bashar-Al-Assad sees everything. Before he became a dictator, he worked as an eye doctor - my condolences go out to the world of optometry. But soon, his regime will be history. Let's pray for that. Syria deserves a lot better, so I'd like to dedicate this blog entry to all the Syrians who have had enough. May Allah and all gods in the universe be with you. 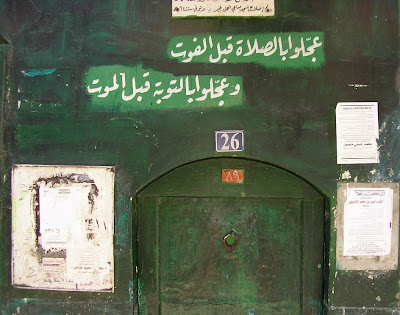 1.
It's a difficult choice.

It's always a difficult choice: Who to sleep with. So many writers, so little time but at Sylvia Beach Hotel you can choose between the cream of the American and British crop. You can shag up with Mark Twain. You can cuddle with Agatha Christie. You can share saliva with Scott Fitzgerald. Or how about enjoying your nightmares with the one and only Edgar Allen Poe?

That's what we did at this wonderful hotel in Nye Beach in Newport, Oregon. It's a theme hotel. All rooms are named after a famous writer. Sluts as we are, we slept with three, the first being Edgar.

If you don't know Edgar Allen Poe, I'll tell you this: That man was seriously messed up - like a latter day Lou Reed with a keen eye for the poodle droppings of life. Just looking at his portrait was enough to make your skin crawl. And his room was creepy as well. Dark red colors, pictures of ravens (not exactly the most cheerful bird around), and an axe above the bed to keep you on edge. It wasn't a healthy room to stay in. After a few hours I actually tried to murder my wife twice.

2.
The next morning we moved out and took a walk on the beach. It was a gorgeous day. No dead bodies around, just your odd Christian fundamentalist gazing wistfully at the young girls. We went back to the hotel and had a wonderful breakfast. Those are hard to come by in the US, unless you're infatuated with plastic spoons. But at Sylvia Beach Hotel they actually have a bit of class: Pancakes, sausages, soy milk, and only a few of those bagels that taste like cardboard.

At noon we moved into the Gertrud Stein room, a small place with a lesbian cabinet, a few of her letters on the wall, and some nice unattractive pictures of the writer. We felt much better in those surroundings, even though there wasn't much of a view.

By the way, there are a lot of cats at Sylvia Beach Hotel. For an extra twenty dollars you can have one sleep on your belly - they should call it Rent-A-Cat. Maybe they should have a house penguin as well because I have a weakness for animals in suits.

3.
On the third floor, there's a library with beat up chairs and a fantastic view of the ocean. I tried to reserve all the chairs like the Germans do, but we Scandinavians just can't get away with that.

Sylvia Beach is an easy place to connect with book nerds. Even New Yorkers become mellow when they look at the sea. Several times I strolled through the small library at the hotel. It has an impressive collection of all the books a writer ought to read - the so-called classics that only have one purpose in life, to make you feel like shit because you haven't read them.


4.
The third night was a treat. Luckily, a nice couple got the swine flue and didn't show up, so the kind people in the reception offered us the suite - the Agatha Christie room, with four windows facing the ocean, a fireplace, and an old typewriter.

God, I loved it. Everything had a twenties feel. I could just picture Miss Marple looking for murder clues in the ashtray, or Hercule Poirot driving everybody insane with his Belgian accent. The room was so wonderful I decided I'd never leave - I actually handcuffed myself to the bedpost instead of paying the bill. I've now been barred for life, but sometimes you just have to fight for what you believe in. 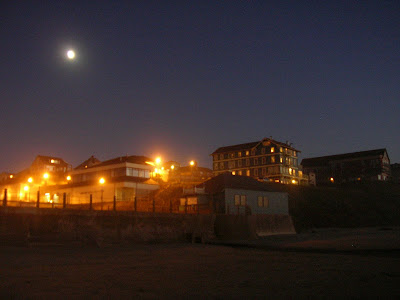 5.
So what can I say? I've stayed at hotels around the world. I've been smothered in Thailand, spoiled in Syria, and humiliated in Costa Rica, but the Sylvia Beach Hotel in Nye Beach, Oregon is something else.

And I'm definitely going back one day. I just have one small request, and I don't think it's unreasonable: Please name a room after me. I know I'm not that important a writer, so the Peter H. Fogtdal Broom Closet will do. Or how about one of those bathrooms where the toilets won't flush - I would be happy with that, too. That's how humble I am, seriously!