Seattle, Washington: The Second Stop On My American Tour 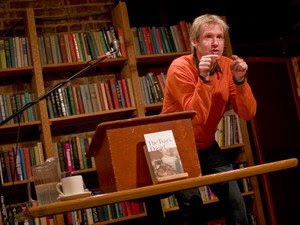 1.
I'm in Seattle, Washington on my book tour.

I've been here several times before. The Seattle area is absolutely gorgeous. It looks a lot like Sweden and Norway and I love Sweden and Norway, even though you're not supposed to admit that when you're Danish.

I've done several lectures before at University of Washington and those semi-Scandinavians keep on inviting me back. I don't mind at all. I'm totally in love with the UW campus. It looks like a wet dream for any sophomore and God knows I'm a sophomore at heart.

At UW I'm presenting The Tsar's Dwarf in a class called Masterpieces in Scandinavian Literature. The poor students are forced to read Hans Christian Andersen, Søren Kierkegaard, and Peter H. Fogtdal. But I'm the only one who has been invited. Hey, I might not be the best Scandinavian writer around but at least I'm not dead. 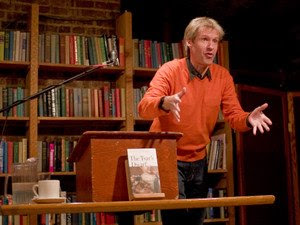 2.
Yesterday I did a presentation of The Tsar's Dwarf at Elliott Bay Book Company, a wonderful independent book store in downtown Seattle. A lot of construction was going on outside, so traffic was a mess. The sun was shining, too - a rare occurrence in the state of Washington.

I would lie if I told you there were a lot of people there: I counted three friends from UW, an American couple who told me they had a thing for midgets, some nice Danes from Microsoft, a Norwegian from Wisconsin with a name I couldn't spell, and a few other people who escaped before I could force them to buy my book.

But what a great book store. Elliott Bay Book Company is the kind of place where you could get lost for days. And the great people at Elliott named The Tsar's Dwarf Book of the Week, so I'm not complaining about anything! 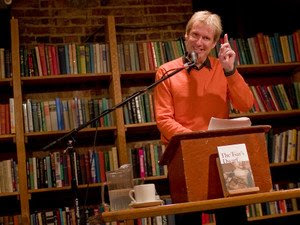 3.
A few quotes from the two reviews in Seattle I'm aware of:

Seattle Times:: "This is the first novel to appear in English by Peter H. Fogtdal, a Danish writer who splits his time between Copenhagen and Portland. It shouldn't be his last; the guy has talent — especially in his rendering of his narrator's biting, contrarian, misanthropic voice ...

With an obvious fondness for the negative twists in his narrator's character, Fogtdal suggests how a vigorous, questioning, nihilistic mind can be a source of strength for a social pariah. And through Sørine he casts a steady eye on the more general whys and hows of existence. "Which," she asks, "is worse: when life stands still, or when it's pulled out from under you like a rug?" - Michael Upchurch.

Book of the Week review from Elliott Bay Book Co.: "Fogtdal's story is grotesque and sometimes brutal, but so richly imagined that it is captivating from the start. It is the story of Sorine, a Danish dwarf and self-described "curiosity cabinet" who is taken from the disease-ridden basement in which she lives to Tsar Peter the Great's court in Russia.

Here the lines are blurred between Sorine's world of filth and the comparative lavishness of the nobles, who treat dwarves both as "poppets," to be coddled and dressed up, and as brutish animals. Part historical fiction, part nightmare, The Tsar's Dwarf is a heart-wrenching tale of humanity." -M. Woolbright 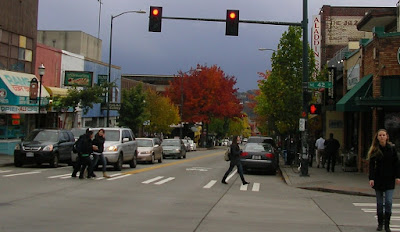 4.
Last night I also did a reading at the Nordic Museum. It's an interesting place with a souvenir shop where you can get a year´s supply of Norwegian flags, Swedish napkins, and Danish toilet paper. The Nordic Museum also offer courses in Scandinavian weaving and how to throw herring after people you despise. (Well, almost)

"Why didn't the Scandinavian countries ever unite?" a gentleman asked me after my reading. "Your countries are totally the same."

People looked angrily at the man who needed police protection to get out of the museum afterwards.

"We actually were united in the 15th century," I offered. "It was under Danish rule. But Norway and Sweden didn't like it much."

Luckily, I also got to sign a few books, and it was a great audience, spirited and tolerant of my rantings.

Life is good and I'm enjoying myself immensely. 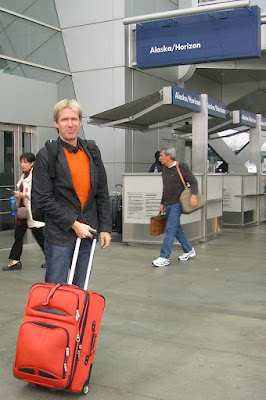 Ah, the life of a writer, going from one airport to the other. Please notice how my sweater doesn't match my suitcase. If only I could afford a publicist who would follow me around like a lap dog telling me where to go, what to say, how to dress.

1.
I love satire on religion.

I've always loved satirical films about faith - not because I'm an atheist, but because I actually believe in God. God is very real to me but that doesn't mean I can't laugh at somebody who pulls down the pants on fundamentalists. On the contrary, they deserve it more than any one I know.

You see, I'm deeply suspicious of organized religion - and sometimes I suspect God is as well. Any belief system that claims it has all the answers is downright dangerous. As long as Christians claim you only can be saved by Jesus Christ, we'll never experience love for mankind, only saintly arrogance. And as long as Muslims believe that Hindus, Christians, Jews, and Buddhists are infidels, there won't be much peace on earth. We have to accept all religions as rivers flowing into the same sea. But even though a lot of people would agree on this, very few behave as if they do. The religious followers always "know" that their God is superior to all others.

However, Bill Maher doesn't have that problem. He thinks that every single religion is crazy and that makes for a good stand up routine, but not for a good movie. However, Religulous is a documentary and starts off by being very funny. Bill Maher interviews a bunch of Christians in "Jesusland". He is witty and irreverent without being too disrespectful. He asks good questions and provokes the church goers, but slowly, ever so slowly the interviews become tedious and repetitious.

It's easy to understand why. Religulous is basically one and a half hour of amusing cheap shots against Christians, Jews, Muslims, and Scientologists who aren't allowed to finish a sentence but are cut off and scorned by a host who seems friendly at first but slowly comes across as a scumbag. None of the victims of the film's editing have a chance of coming off as coherent or sane. Why? Because Bill Maher doesn't want them to. They act as straight men to his punch lines; they're half wits who should know better than believe in fairy tales. And if you don't get the "truth" of this, the director Larry Charles puts funny subtitles on the screen to underscore how stupid and gullible the believers are.

So is all this amusing? Often, yes. Should we take it seriously as "proof" of religious insanity? Not at all, because Bill Maher always gets the last word. The wisdom of others ends up on the cutting room floor and that makes for a predictable movie.

2.
I read somewhere that a lot of people find Bill Maher courageous for taking up the subject. Why? If the man were courageous he would have gone to Yemen to shoot the Muslim section of his film. Now he just flew to Amsterdam to smoke some weed and make fun of people whose English isn't good enough to understand his sarcasm.

But as far as I'm concerned, excellent satire requires a warm heart. It requires cynical curiosity, a certain degree of rage, but not self righteous anger. Even though Bill Maher suffers from the latter, he seems like a nice guy. I'd drink a glass of Kool Aid with him any time, but to my mind Religulous was a major disappointment. Not only for the Bill Maher fan in me (I love him on HBO), but also because I admire Larry Charles who directed Borat and many episodes of Larry David's Curb Your Enthusiasm. Both were unpredictable masterpieces.

Religulous is definitely not but could have been interesting if Bill Maher had been a tiny bit open minded. If his attitude had been, "this is weird, but let me see if I can make some sense of it", the film would have been more provocative. Now he just wants to poke a finger into the eyes of the non-scientific "morons" who have experienced God one way or another.

So would somebody please make a funny, warm, irreverent movie about God and religion - preferably somebody who doesn't have all the answers? Religulous is a long dogmatic cheap shot from a brilliant comedian. Yawn!