Election in Zimbabwe: Please Don't Be Cruel to Robert Mugabe. He Is Such a Sensitive Dictator 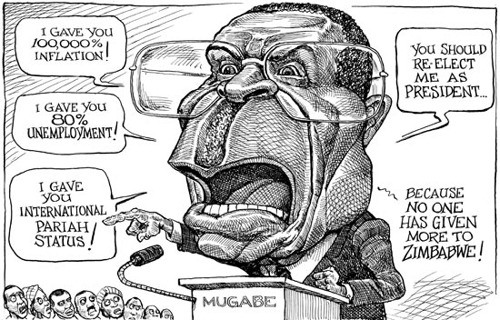 Mugabe is such a sensitive dictator. And as we all know, sensitive dictators don't have any sense of humor. They are too busy torturing poets and worrying about their stool. So have a heart, have a little compassion for this aging dictator who may or may not become Dictator of the Century in Zimbabwe at this year's election.

To tell you the truth, no matter what happens I feel sorry for Robert Mugabe. I wouldn't want to swap lives with that man. Too many power hungry spirits are building nests in his short hairs. Too many vicious people are making fun of this proud leader who has never lost an election. Even when he has lost an election.


2.
Let me mention some of those people that humiliated him not that long ago: Raisedon Baya, Christopher Mlalazi, Aleck Zulu, Lionel Nkusi. These scoundrels had the audacity of writing and producing a play called The Crocodile of Zambezi. It premiered May 29, 2008; the writers and actors had worked on it for two years.

Don't these artists understand that Robert Mugabe was appointed by God? Does God have a crisis? Of course not. God takes care of business as He sees fit. God is in perfect control and if He doesn't win the elections, He still wins the elections. That's why He is so loved by His people.

So back in 2008, Robert Mugabe sent some of his boys from the secret police. They rounded up the actor Aleck Zulu and the production manager Lionel Nkosi and gave them a ride in their car. They tortured them and put a gun in their mouths. Maybe they broke a few limbs as well because you shouldn't insult the man who has given so much to his subjects .... sorry, co-patriots.

The play, by the way, was closed down after one performance, which is totally understandable, because who in their right mind would want to see a play making fun of the Supreme Savior of Zimbabwe? Instead these artists should lavish Mugabe with praise. They should write pompous poems to glorify His strength, they should construct endless bridges in His name, or create religious cults instead of telling lies about this Glorious Incarnation of Light.

3.
As I said, Robert Mugabe is a sensitive dictator. And maybe He sleeps a little better when plays like that close down. Maybe He's even proud that this election will be a little less rigged than the ones before?

So have a little compassion, have a little heart. Not for Zimbabwe but for Roberto Mugabe. The poor man had a difficult childhood. So why shouldn't the rest of his people?

This entry is dedicated to the brave people of Zimbabwe who have the courage to laugh through tyranny, and to organizations like American and Danish PEN that tirelessly work for protecting the freedom of speech in countries like Zimbabwe. I'm proud to be a member of both. The brilliant cartoon above is all over the net, but I haven't been able to find out who the artist is.