Hi, Hermann Hesse, I'm Right Outside Your House. Why Don't You Come Out And Play? 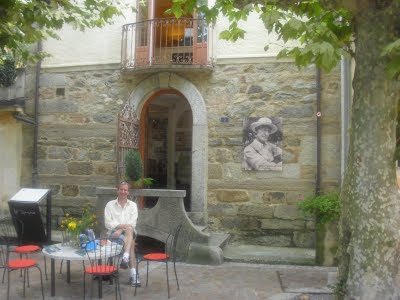 Frankly, I haven't been invited, but I don't really care, and Hermann probably doesn't, either. I'm in his house in Montagnola in the Italian speaking part of Switzerland. Hermann Hesse lived here from 1919 until his death in 1962, and I can't say I blame him. The area is absolutely gorgeous, overlooking Lago di Lugano and the majestic Alps. If I'd lived here I would have written Siddharta, too. 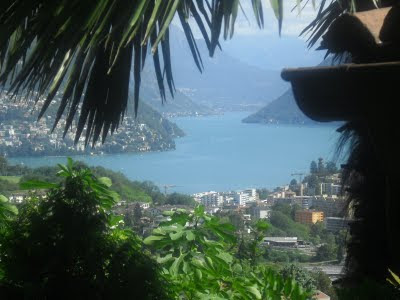 Right now I'm walking around the first house Hesse lived in. It's called Torre Camuzzi and is a museum for the great German/Swiss writer who won the Nobel Prize in 1946. One Nobel prize is too little if you ask me. The man should have won two! I mean, have you ever read Demian and Siddharta? Hesse wasn't just a great writer, he was also a mystic, a philosopher, a pacifist, and a humanitarian who stood up against the Kaiser, Hitler, and the nationalism of the day.

When I read Demian the first time I was totally blown away because the novel is a spiritual manifesto and a visionary masterpiece that easily could have been written today. I mean, can you mention any writer in the world who had such insight, such language, and used spiritual symbolism in a way that would have made Confucius, Krishnamurti, and Jung proud? Actually, Hermann Hesse was inspired by Jung as well. 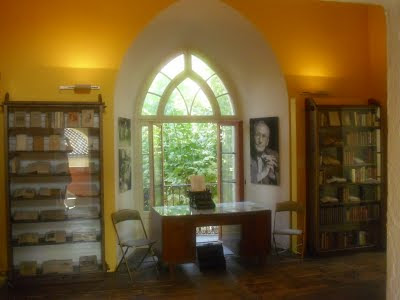 2.
I have a lot in common with Hermann Hesse, except for the small fact that I'm not a genius.

I'm as heavily influenced by Indian mysticism as he was. I'm in love with Francis of Assisi, and I'm a nomad and pacifist as well. So Hermann Hesse holds up a mirror for me. All great artists do. When a reader loves a writer it's never only the writing he or she connects to; it's something deeper - a vision shared, a voice in the wind, a sense that we were downloaded from the same celestial sphere.

Hermann Hesse even had a younger partner as I do, and he loved traveling in Italy - a country that always has been a great inspiration for me as a novelist and soul. Funnily enough I never knew anything about Hesse's personal life until a few months ago. In 2001 I read Siddharta and loved the prose and the wisdom, but it's only this summer I've started to read the rest of Hesse's books, and what a great journey I'm on. Narcissus and Goldmund is another gem dealing with the struggle between the spiritual life and the earthly pleasures.

It's also quite a journey walking around Hesse's home, admiring his straw-hat, the glasses he wore, the ancient typewriter he wrote on with the uneven keys - not forgetting the private pictures of the novelist/poet/painter sunbathing in the nude. (Yes, Hermann was German after all and Germans like to take off their clothes). I almost feel as if I'm stalking a ghost, but that's okay because I love stalking, and I enjoy every minute I spend in the small, quaint museum. 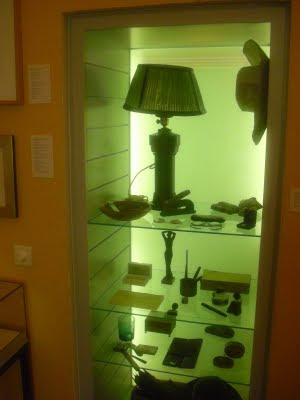 3.
The last thing I do is sit by Hermann Hesse's tomb a kilometer away from his house in a beautiful cemetery, surrounded by cypresses and bird song. His gravestone is simple and humble contrary to most of the others. A small Buddha is sitting on top, and Hesse's third wife is lying next to him. After all, he was just another soul passing through, guided by forces so much greater than him, and it's in that knowledge true humility is born. 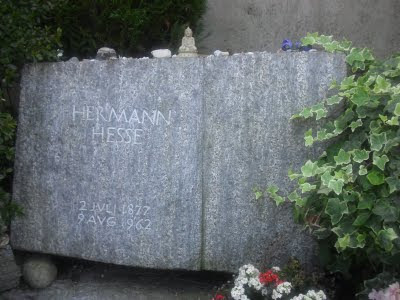 I'm very moved by the stillness and the presence at the small cemetery. However, I know that Hermann Hesse wasn't a saint during his life. His work was everything to him; he often suffered from depressions and felt like a misfit in this dualistic world, but I'm extremely grateful for the art and the insights the weird German Steppenwolf gave to the world and me.

So danke, grazie, thank you, Hermann. I enjoyed stalking you, and I'll continue reading your novels, your poetry, and your fairy tales until there are no more left.  Why wouldn't I because sometimes, for a second or two,  I sense you around me, even though that's most likely my imagination. 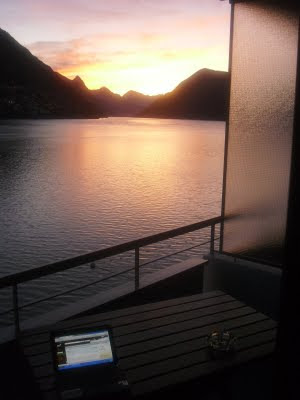 Writing at Lake Lugano the day after I visited the museum in Montagnola.

Posted by Danish Accent at 9:22 AM No comments: