Kafka in Disneyland (Prague, The City of Sweet Nightmares) 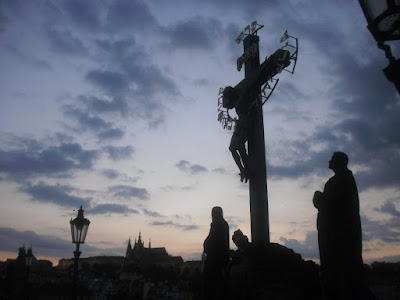 1.
It happened at my wonderful hotel in Prague.

I'd been watching the first half of the Spain-Germany semifinal game and went out to get an ice cream with a friend. We got delayed and ran back to the hotel, up the stairs, and into my room. Then we threw ourselves on the couch, and I turned on the TV.

Strangely enough, I noticed that the TV-set had been moved, but I didn't think much about it. We wanted to concentrate on the game, and luckily none of the teams had scored.

But something felt wrong. I started to look around. On the desk there was a message in a handwriting I didn't know. On the table there was a computer that wasn't mine. Next to it, a book about Basel was thrown onto a chair. I started to sweat. Had I been reading a book about Switzerland without knowing it? Maybe I was sicker than I thought?

I slowly turned to my friend, "Claudio, I think we've walked into the wrong room."

I turned off the TV and we ran out of the room. When I carefully closed the door I noticed that we'd gone into number 5 on the second floor, not number 9 on the third floor.

Evidently, my key card could get me in anywhere at this Czech hotel - well, maybe all over Prague and Eastern Europe as well?


2.
Actually, nothing should surprise you in Prague.

It's Franz Kafka's birthplace. As my literary readers know, Kafka is the patron saint of paranoid schizophrenics everywhere; he's a writer so sinister and dark he makes Stephen King look like Mary Poppins.

Actually, Prague is a pretty dark place, too. I'd been in the Czech capital for less than two hours before I was ripped off. This happened at one of the many official Money Exchangers. I got $20 less than the proclaimed rate and told the woman I wanted my money. "Not possible," she said, her eyes enjoying the fight. A Czech writer friend of mine had to call the police before I got the right amount of koruna.

"Everybody cheats in this city," my Czech friend said. "They feel they have to because they're convinced that you cheat, too."

Kafka would have been pleased. 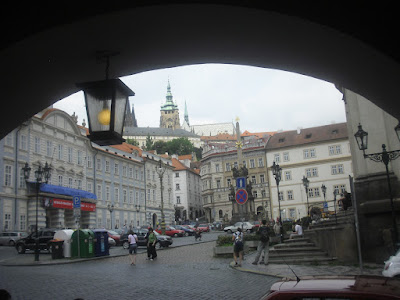 3.
After that nasty experience, we wanted to do something to cheer us up, so we went to the Medieval Torture Museum. I was disappointed that they didn't indulge in water boarding back in those days, but Dick Cheney wasn't around in the 16th Century. Or maybe he was. I believe in reincarnation and I can easily see Cheney as a Bohemian Duke practicing his art on Slovakian scumbags.

Later we went to a Czech restaurant and feasted on delicious pork knees - something that actually passes for food in the Czech Republic. They took me three days to digest, but hey, at least they were expensive. 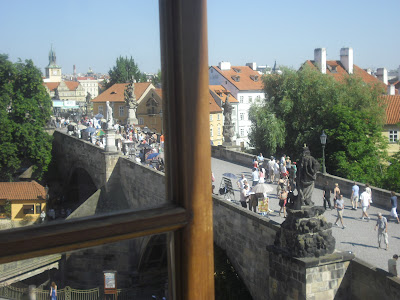 4.
So didn't I like Prague at all, you may ask?  You got that wrong, I absolutely loved it. Prague is an unbelievably gorgeous city, a Gothic Disneyland of sheer beauty with castles and magnificent churches. It's one of the prettiest capitals in Europe, but it's not a city that gives you a hug. Prague kicks you in the gut; it's a poetic nightmare. It's unreal, disillusioned, tired, fascinating, and worth visiting if you take nothing for face value.

"The Communists have gone but have been replaced with people of the same mind set,"my Czech writer friends says. "Nothing has really changed. Our revolution has become bitter velvet."

Her name is Dominika Dery. We were both invited to a literary conference in Cognac four years ago. Dominika has written a fascinating book about being the daughter of a Czech dissident in Communist Prague in the seventies and eighties. It's called The Twelve Little Cakes and did well in Australia, America, France, and Italy. But strangely enough, it hasn't come out in her own language, Czech.

"People aren't interested in that kind of book here," she said.

We crossed Karluv Most, the famous Charles Bridge where there's a fabulous view to the castle, the green hills, and the Kafka Museum. It's one of the prettiest places in Central Europe. Unfortunately, a few tourists around the world know that as well, so you can't cross it without passing ten Japanese tour groups and 1001 Danes lusting for Czech pivo ... 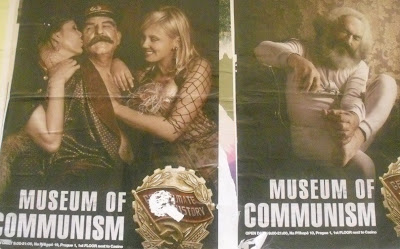 5.
My last morning in Prague I woke up and discovered that I'd turned into a cockroach.

My back was hard as armor; my abdomen had been divided into rigid bow-like sections. I had numerous legs, but they were pitifully thin in comparison to my old ones. When I reached for my key card, I got the feeling that good old Franz would have been pleased.