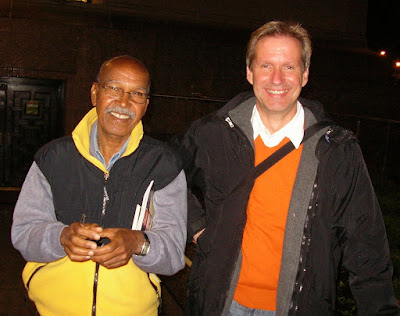 Nuruddin Farah and your bloghead outside Brooklyn library after a PEN World Voices event in New York, May 2008.


1.
They hand out free condoms in Housing Works Used Book Café in Soho, New York. Maybe it's because they expect the audience to have sex with the writers. What do I know? I'm just a novelist from Denmark and we're much more naive than you think.

I've taken the trip from Oregon to New York to write an article about PEN World Voices for Danish PEN. PEN is an international organization of writers who fight for imprisoned wordsmiths around the globe - for freedom of speech and the right to write.

Here in New York there are more than 75 events with authors from the whole world, among others Salman Rushdie, Umberto Eco, Annie Proulx, and Michael Ondatje. In the book café, we're about fifty people listening to three authors discussing the theme of the festival, Public Lives/Private Lives - and the world as one large family. As Rick Moody from American PEN puts it: "I'm from the Nation of Fiction, not from America. I often feel I have much more in common with writers than I do with my own countrymen."

I talk to Rick Moody after one of the events because I want to tell him how much we enjoyed his visit in Copenhagen last winter. Moody was one of four American writers who visited Danish PEN. He even brought his wife and an old guitar. "God, I loved it over there," he tells me. Rick Moody better say that - Danes demand compliments from our visitors or we'll hold them in contempt forever.

I talk with the author of The Ice Storm for another 22 seconds, then he's off to one of the other events that includes 160 writers with 160 different accents ... 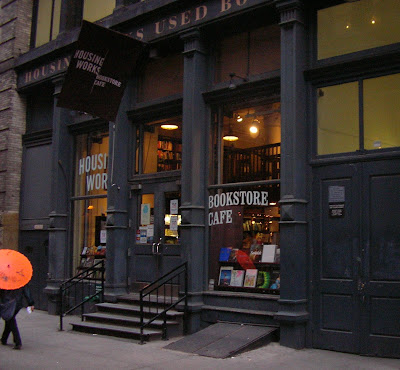 2.
I move through New York like Hamlet's ghost, down narrow streets in funky West Village, to 59th Street where stressed out business men hunt down taxis like they were lions in the jungle. New York is a wonderful melting pot of nerds and neurotics; it's full of surprises ... a Sikh here, a closet Republican there ... a city so divinely diverse that you just have to love it. Walking around Manhattan is like being slapped in the face with a baseball bat, but it's the kind of pain you can't get enough of.

The many World Voice arrangements are scattered all over town - everywhere from the Irish Institute to Jewish museums, to Joe's Pub and Scandinavia House on Park Avenue. This year I'm just a spectator, but in 2009 I hope I'll be invited to participate, since my novel The Tsar's Dwarf is coming out in English and French in a few months.

In 2008 Denmark is represented by Christian Jungersen, the author of the thriller The Exception. Christian Jungersen got a rave review in New York Times for the book. He is on panel with the Dutch writer Lieve Joris to discuss evil - not in himself, but in the world. That becomes clear when a member of the audience asks why the two writers have chosen to write about the subject - if they worked through their own dark sides when they wrote the books. Interestingly enough, none of the two seem to understand the question but are more comfortable discussing genocide in Congo and mobbing in Danish work places ... 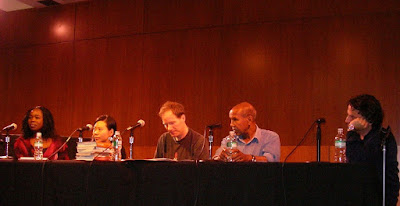 One of many great events at PEN World Voices in New York. This one is moderated by Rick Moody in the middle.


3.
The next day I meet up with Nuruddin Farah, the Somali author who everybody thinks will win the Nobel Prize one day - everybody but himself, that is. Nuruddin is a humble man, so when people tell him he's Africa's greatest writer, he usually looks away or up some one's nostrils. I'm happy to see him again. We know each other from Ledig House, an international writers' colony in Omi in upstate New York. We were both residents there in the spring of 2002 where we spent time walking through the forest and playing croquet on the lawn. Back then we laughed a lot when we were together. At one point, Nuruddin named me Pierre The Dane - a name that turned out to be prophetic, since I now have three novels out in France and won a French literary award in 2005.

Nuruddin Farah is part of an event called Writing Place, Finding Refuge with Fatou Diome from Senegal, Etgar Keret from Israel, and Xiaolu Guo from China. They turn out to be a wonderful panel - wise, charming, and witty, and all four of them have interesting things to say about living and writing.

"I'm dead tired of being called a Chinese writer," Xiaolu Guo says. "I refuse to represent any country. In China I have to consider who is chairman before I can write. That's why I'm here to do my books and make my films the way I want."

Nuruddin Farah adds: "I know w hat you mean. To me you can't say about a writer that he or she is from Africa or Europe. Those concepts are too vague. A writer doesn't need a continent. He just needs a quiet room and a computer."

Fatou Diome laughs out loud: "A quiet room? There are no quiet rooms in Senegal. That's why I had to move to Paris or else I would never have written a word. France is a ladder from where the African writer sees her continent. Furthermore, in Dakar no one leaves me alone. In our culture people come to your house and talk, talk, talk, so I would have to kill a lot of people before I could write a word ..."

Fatou Diome laughs heartily. She doesn't look like some one who'd be able to wipe out an entire population. But then again, who knows? Writers are made of powerful stuff ... 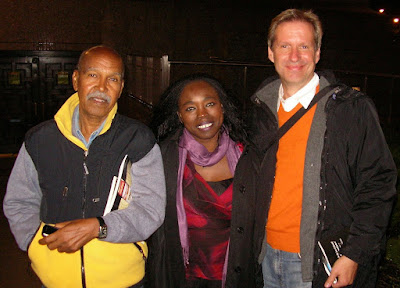 Nuruddin Farah from Somalia, Fatou Diome from Senegal, and Peter H. Fogtdal from Denmark. The honor is totally mine ...


4.
The theme of killing is also evident at another discussion two days later. African Wars is the name of the event. It takes place in the French institute and ironically, it turns out to be the most dysfunctional panel of all. Three writers are on, and the talk is dominated by Chenjerai Hove from Zimbabwe. He keeps on interrupting his colleagues, much to the annoyance of the moderator and most of the audience. However, Hove has interesting things to say:

"You know, I'm so tired of Westerners who go to Kenya for three months and come back calling themselves experts on Africa. How can you be an expert on Africa when you've only lived in one country? It's totally absurd."

The big man from Zimbabwe continues: "Right now I live in Norway. A few months back a Norwegian kid came up to me and asked, "Mr. Hove, is Africa as large as Norway?" That is a typical question from a Westerner. Most people only know Africa for three things: starvation, wild animals, and tribal wars. Why doesn't any one write about how beautiful our continent is?"

I love listening to Chenjerai Hove, but a few minutes later he starts to fight with Nuruddin Farah. "I never agree with him on anything," he says with pride. We sure believe him!


5.
On my way back from one of the events, Nuruddin Farah gives me a ride. We're driving to his hotel on Lexington Avenue. Nuruddin is tired because everybody wants something from him. After the latest event, two students came up to him. They were writing a PhD about his writings. One of them asked him a question that was so academic and so overly intellectual that he looked tired at her and said, "was that in English?"

But now we're sitting in the taxi. The lights of New York are glowing, the whole city is so hyper active that you can't sit still. Manhattan is electric, I'm happy to be here, but after a few moments I discover I've lost my cell phone. I look everywhere, in every pocket known to mankind, but it's gone.

"Well, you may have lost your phone but you found an old friend," Nuruddin tells me.

"That's a high prize to pay," I sigh and continue to go through my pockets. Nuruddin smiles, but when we let him off at his hotel, I've recovered from my loss and feel great to be a part of Rick Moody's Nation of Fiction.


6.
A few days later, the literature festival is over. I return to Oregon and when I'm sitting on the plane I contemplate what has made the biggest impression on me. Apart from meeting my Somali friend, I think it was a comment from the Israeli writer Etgar Keret. At an event, he told the audience that a few years ago he'd been at a conference with Palestinian writers. Things hadn't gone too well, but suddenly a Palestinian had turned to him and said:

"Do you know what? We Palestinians and you Israeli might not like each other very much, but if the characters in our books met, I think they would have a great time. Actually, I'm totally convinced that they would ..."


Every writer on earth should support International PEN in its fight for imprisoned writers around the globe. Go to American PEN on www.pen.org or find your local chapter online. PEN has hard working chapters in most countries, including Denmark, Bulgaria, Switzerland, and Slovakia. 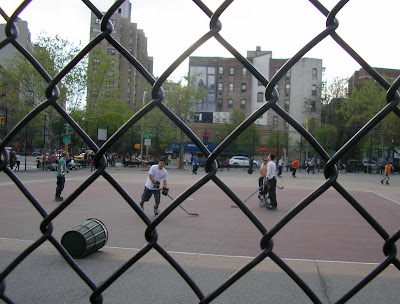