Meir Shalev, the award-winning Israeli author who was one of the many participants at World Voices 2009 in New York.

1.
Life is a funny and strange four letter word.

Three years ago I was an official blogger for PEN at World Voices in New York.  At the party in a fancy midtown hotel on Manhattan I ran into Meir Shalev, the famous Israeli author.

I'd seen him on a panel a few days earlier where he'd made a wonderful impression, but apart from that I knew nothing about him. But after talking to the man for less than two minutes, I found out that he once met my Jewish Danish grandfather!

From a small town in Denmark. Far from New York and Israel.

Ladies and gentlemen, how weird was that?

2.
All this came to light just because I bragged to Shalev about being 25% Jewish (my left leg?). My maternal grandfather was born in Safed in 1898 and was abducted by a Danish missionary under mysterious circumstances, ending up in my cold Scandinavian country as a frightened six year old.

"Oh, yes, yes" Meir Shalev told me, "I've heard that story before. He was baptized against his will, wasn't he?  His name was David something. Actually, I met your grandfather twenty five years ago when I was in Denmark. He was a very interesting man."

I stared at Shalev. Was he a mind reader or some kind of memory psycho? Or was I on drugs without knowing it? But then again anything can happen in New York. Some one could have slipped a Semitic pill into my Chardonnay to take advantage of my body - or more likely, to force me from writing more novels.

Meir Shalev continued: "I met your grandfather through Herbert Pundik (a renowned Danish journalist and editor). Then I took the train and visited him an hour and a half from Copenhagen. He lived in the countryside in a beautiful house by a small pond."

I nodded and kept on staring at this strange Israeli writer. This was all too surreal, but at the same time, my granddad's life story was so incredible that most people would remember it if they heard it.

In 1998 I wrote a novelized biography about his life called Drømmeren fra Palæstina (The Dreamer from Palestine). It was my breakthrough to a larger audience in Denmark and stayed 85% true to the real events of his life, but unfortunately, the novel isn't out in English. It was published in French as Le Rêveur de Palestine (Gaia Editions, 2006), and got a rave review from French critic Mazarine Pingeot-Mitterand at the Salon de la Littérature Européenne de Cognac (Cognac Festival for European Literature) in 2006.

3.
My maternal granddad's name was David Huda. He was the son of a Arab father and a Jewish mother, and he was abducted by a Danish Christian missionary when he was six, probably because his Arab Christian father wanted him to have the "right" upbringing.

Then David was brought to Denmark and forced to live in a strange land with a pair of cold, Lutheran foster parents who tried to turn him into a "good" Dane. At that time, no one had dark skin in Denmark, so my grandfather was considered a freak or a circus act by the farmers of Kibæk in Western Jutland. 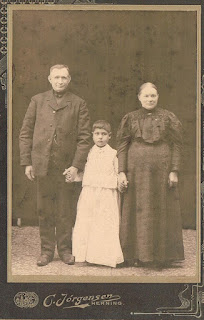 My granddad's Christian baptism in 1906. The poor kid had his curls cut off and put in a white robe that made him look like a girl. The event traumatized him for life.

4.
On so many levels, David Huda's life has been important to me. My grandfather was a charismatic man with a great sense of humor, and the novel/biography I wrote about him was my breakthrough in Denmark to a bigger audience.

"I remember that David Huda escaped to Sweden during the Second World War in the bottom of a fishing boat," Shalev said. "He was very ill of cancer when I visited him in the early Eighties, but he made quite an impression on me."

I nodded. My granddad died in February 1982 but had just come alive on Lexington Avenue in New York on a cold May day, resurrected by a wonderful Israeli author I'd never heard of before and who definitely hadn't heard of me.

But maybe I shouldn't be so surprised. American PEN and World Voices are about connecting writers from around the world. Well, what can I say, PEN? You're doing a damn fine job!

Drømmeren fra Palæstina  (Lindhardt & Ringhof) will be out as an e-book in Denmark this summer. And it will re-released as an audiobook as well, so my old novel/biography is getting a small revival.