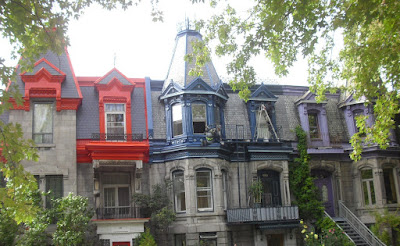 Sunday, September 20
My Pretentious World Tour got off to a good start with a memorable reading at the Athens Book Fair and some Etruscan writing in a small Italian town, Sutri.

Now I find myself on Air Canada's monkey class on my way to Festival International de la Littérature in Montreal. We're four foreign writers who have been invited to this French speaking event, Roberto Pazzi from Italy, Najat El Hachmi from Spain and Marocco, and Jakob Arjourni from Germany.

I arrive in Montreal on a beautiful Sunday. In the airport I'm picked up by the Danish Honorary Consul, a nice man who doesn't speak a word of Danish.

"How can you be consul of Denmark if you don't speak the language?" I ask rudely.

The nice man shrugs his shoulders and drives me along the bay, so I get a sense of the beautiful surroundings.

"What's the capital of Denmark?" I quiz him aggressively.

"Je ne sais pas," the Honorary Consul says and invites me to a delightful lunch with his wife. She doesn't speak Danish either but at least she's heard of Copenhagen.

Actually, I'm not being fair. Seven years ago the sweet couple was in Denmark for a big party for the Danish Honorary Consuls from around the world. They deserve it because they work for free. But hey, they do get complimentary business cards and herring for lunch, so what more can they ask? 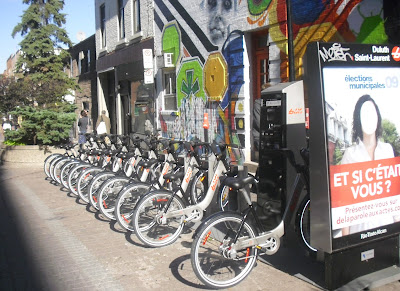 Monday, September 21
The Goethe-Institut in Montreal is co-sponsor of the festival, so two delightful women invite me for lunch at a nice Italian restaurant. One of them, Lise Rebout is from Nancy, France - Hanna Zehschnetzler is a trainee from Bonn, Germany.

They don't hand me the key to the city, but a key to the public Bixi bikes in town, so I can ride around making a fool of myself. Montreal is great. For instance, Starbucks isn't called Starbucks. It's called Café Starbucks which just goes to show how sophisticated they are in Quebec. I also like the fact that the homeless say "bon jour" instead of "how are you, Fuckface?" 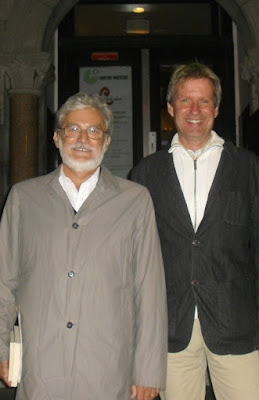 Monday, September 21, evening.
I connect extremely well with one of my colleagues, Roberto Pazzi from Italy. Not just because I speak Italian, but because we're both writers of historical fiction and inspired by spirituality and astrology in our work.

Roberto's books are out in 26 languages. His novel Conclave has been sold to 18 countries and sounds like a wonderful read. Luckily, I'm not the jealous type (?), so we hang out a lot talking about Proust, the Baroque period, and our killer Plutos. We both claim we communicate with the dead, but a historical novelist has to, since the people who lived back then are ... dead.

There is absolutely no way a writer can write about a historical figure without that person trying to influence you. The fact that he or she doesn't have a body has nothing to do with it. 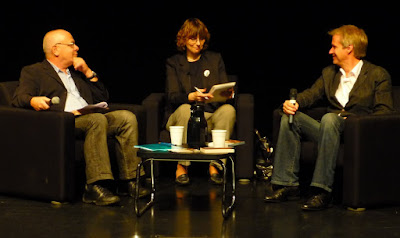 Tuesday, September 22
At 7 pm I'm being interviewed by Jean Fugère from Radio-Canada.

The event is called "Une heure avec Peter H. Fogtdal" and it takes place in the huge auditorium at Grande Bibliotèque downtown. I would lie to you if I said it was full, but since I am a liar, the auditorium was full.

Jean Fugère interviews me about La Naine du Tsar (The Tsar's Dwarf) and luckily his questions are great. Towards the end he says, "I've been doing this for 20 years, but your novel is the first Danish book I ever read. In Canada the only Scandinavian books we know are Swedish and Norwegian thrillers."

I sigh. There is nothing wrong with thrillers, but couldn't people start to show interest in our Danish mass murderers? Hey, we're good at mayhem as well, dammit! After the event I talk to a few readers who ask me if there are a lot of trolls in Danish literature ... 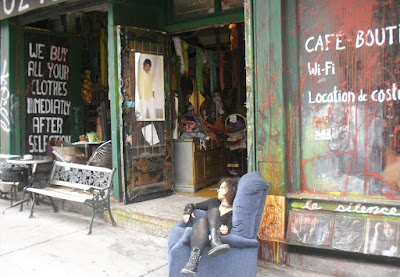 I ride around on my Bixi bike in the old part of town. I hang out in the Portuguese ghetto around Duluth, I enjoy the cafes at Saint Denise and downtown. People here are friendly but not obsessively so like in the Pacific Northwest where everybody is smiling to the point of insanity.

And hey, the Quebec French like their cigarettes. They'll be happy to blow smoke in your face any time any place. But you end up forgiving them because Montreal is a vibrant city of bistros, beautiful houses, seedy strip clubs, and oui, c'est vrais Café Starbucks ... 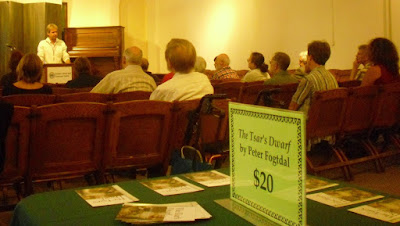 Thursday, September 23
My second event in Montreal is at Atwater Public Library and this time I'm allowed to do my show without a translator. My reading is part of a lunch series that attract a lot of Danes from the Scandinavian ghetto in town. It's great fun to meet them and I run out of books to sign, so I start on Stieg Larssons'. Those dead Swedes need all the help they can get.

Roberto Pazzi and the wonderful Spanish writer of Moroccan descent Najat El Hachmi are kind enough to join me for my reading. Najat is a known essayist in Catalonia and her first book won an important prize in Barcelona. 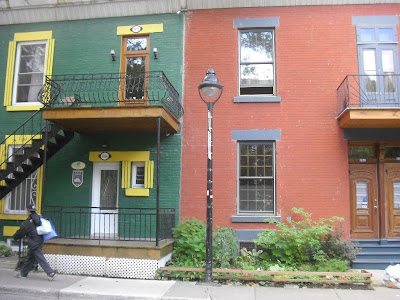 In the evening Roberto Pazzi and I hang out again. The only bad thing I can say about the man is that he doesn't like soccer. At one point he watches me carefully and pays me a wonderful compliment, "Peter, you have two faces. One of them is a ragazzino (a young boy), the other one is a wise old man, and they change all the time."

As the readers of Danish Accent know, it's definitely the boy who maintains this blog ... 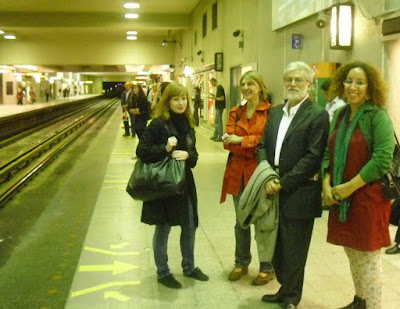 My two colleagues Najat El Hachmi and Roberto Pazzi with Hanna and Lise from Goethe Institut, co-sponsor of Festival International de la Littérature. Thanks to Hanna Zehschnetzler for the two photos from the readings.

Posted by Danish Accent at 9:46 AM No comments: 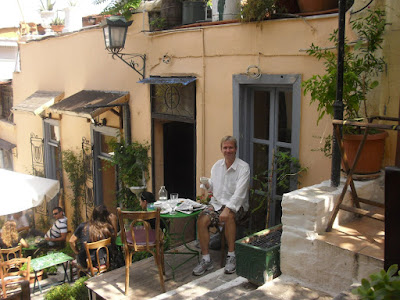 Thursday, September 10, 2009:
Apart from looking into the eyes of my girlfriend when she's asleep, my favorite thing in the world is to be on book tour, especially My Pretentious World Tour for The Tsar's Dwarf.

Let's face it, I'm not a household name in any country, but still the world wants me. I'm going to Athens, Greece; Sutri, Italy; Montreal, Canada; Portland, Oregon, and Hongkong, China. And on my way back, I'll stop in Varanasi (Benares) and Mumbai, India to do some research on the novel I'm writing. All this is covered by wonderful grants from the Danish Art Council, CopyDan, and DPA, The Danish Songwriters' Guild.

I'm a lucky man. And right now this lucky man can't sleep. He lies in bed, his silly head full of silly ideas while the world of literature is waiting to devour him. 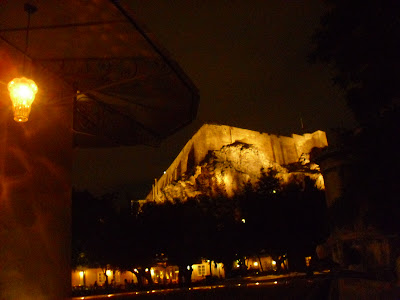 What's wrong with the climate? I'm leaving a gorgeously sunny Copenhagen for a rainy, dreary Athens. Are the Greek gods on drugs? Actually, the atrocious weather is appropriate since this year's Athen's Book Festival has a theme, Greening the Future. So now The Danish climate has moved to Greece and the Greek climate has moved to Denmark - that is kind of scary.

I'm met in the airport by the Danish ambassador's Greek driver. The man turns out to be an entertaining cynic. He tells me at great length about the politics of his country, how the Greeks are fooled by corrupt politicians, how he was born in Australia where there isn't much to see, how Denmark should get its act together and clean up Copenhagen. It's an enlightening monologue from a smart man who seems disillusioned with the ways of the world.

As I said, I'm only disillusioned with the weather. "When it rains in Athens, the whole city comes to a stop," Panagiota Goula, the Greek cultural attache at the Danish embassy tells me. "Then everybody in Athens gets into their cars and traffic breaks down."

Later she shows me several Athens newspapers that mention my name. But if someone gave me a million dollars and a little of that excellent taramosalata, I still wouldn't be able to decipher where my name was on the page. 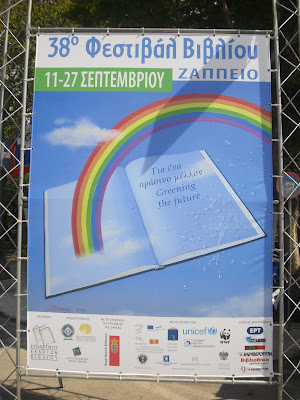 I'm invited to a liquid lunch with the Danish ambassador, my colleague Iris Garnov; Leo, my translator, and four local poets - one of them turns out to be the Greek ex-ambassador to Sudan. Talking about multitasking!

The ambassador's apartment has a gorgeous view of Acropolis and the rest of Athens. "Can I be the next ambassador here?" I ask the nice man whose name is Tom Norring. "No," he says flatly and I leave the apartment totally devastated.

Luckily, I recover for tonight's performance. About thirty people show up at The Danish Institute in Plaka where a Greek actor Konstantinos Konstantopoulos reads excerpts from The Tsar's Dwarf and my latest Danish novel Skorpionens hale.

Even though I don't understand a word of the Greek translations, it's obvious that Konstantinos Konstantopoulos is doing a fantastic job. I'm totally spellbound by his voice. He never looks up when he reads but he totally stays in the world I've created. Two fine Greek musicians add flavor to the night, and I'm moved to tears by the whole event.

My only regret is that Zeus and Pallas Athena didn't show up. Where are the Greek gods when you really need them?

By the way, tomorrow I'm going to Acropolis. I believe it's some kind of semi-famous ruin they put on all of their postcards ... 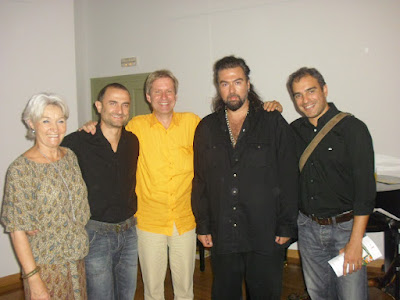 Iris Garnov, Danish poet, Georgis Georgiadis, musician; yours truly; the Greek actor Konstantinos Konstantopoulos, and Dimitris Theocharis, musician. What a memorable evening. (Sorry about the shirt though. I don't look good in yellow)